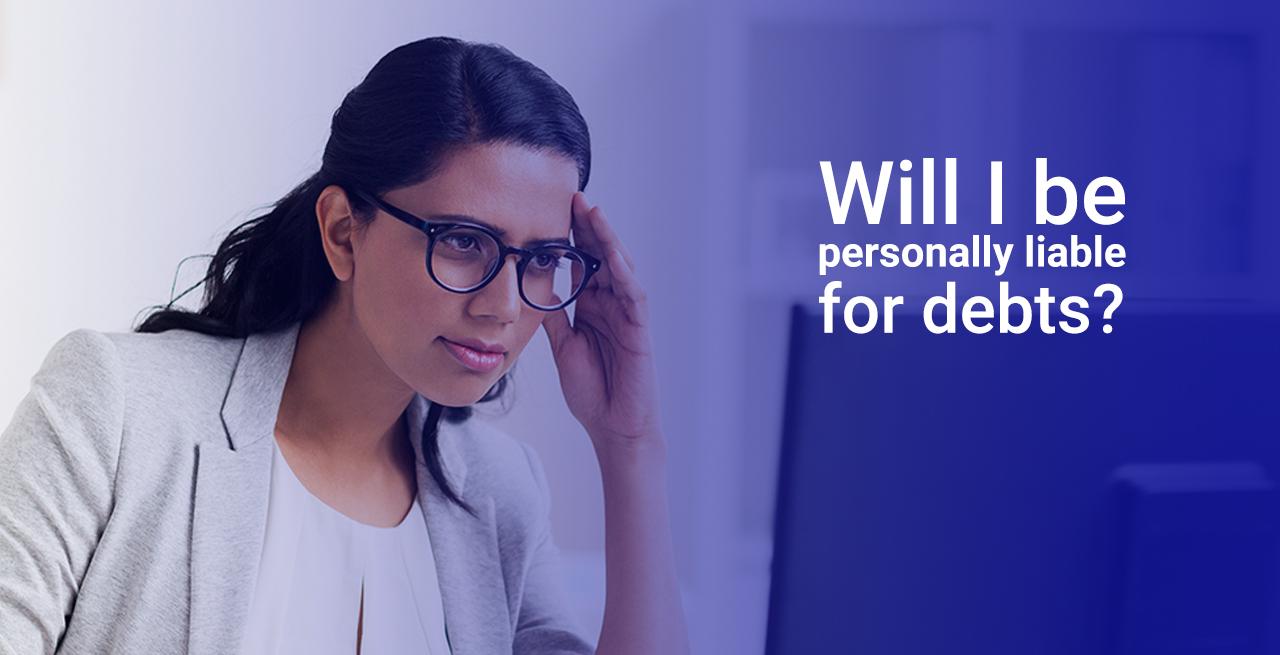 Am I personally liable?

When you are a director of a business that could be in trouble you will naturally be worried about what the effect on you and your loved ones will be. No wonder then that the most Common questions directors ask are “am I personally liable for the debts of my business” or “will I lose my home”.

Well, the good news is that you are very unlikely to lose your house and you are also often not personally liable for most business debts. That said, insolvency situations are rarely not cut and dried and there can be complications that could affect you personally. Below are details of some of the common problems.

There are situations in which certain creditors will have asked for personal guarantees in the past. Most commonly these are banks, finance companies and lessors. Personal guarantees are particularly common for new or start-up Companies raising their initial capital.

In some industries, it is not uncommon for suppliers to require personal guarantees. This particularly common in the building trade for example.

Firstly, it should be noted that Bounce Back Loans and CBILS (under £250,000) do not have personal guarantees.

However, you may also have an overdraft, invoice finance arrangements or other loans which could have personal guarantees.

It is important to note that all personal guarantees you agreed to should been clearly explained in separate documents and you should have been made aware of them before you sign off on them.

It is normal for there to be sums either due to the director or owed to the Company by the director. A common example may be where you have outstanding expenses which you have yet to claim from your Company. This is money that you are owed by the Company.

It isn’t uncommon for example for expenses to still be owed to a director during the insolvency process. If this is the case, then you are still owed the money by the company.

Where we often see problems is when directors owe money to the Company in the form of a directors loan or similar. People often don’t appreciate that in an insolvency situation this is a debt due to the Company and the insolvency practitioner will have no choice but to treat as an outstanding debt and look to recover the money.

There is more information here on Directors Loan Accounts and Dividends.

Most directors pay themselves via a combination of salary and dividends. Dividends can only be drawn if the Company has reserves to pay them. The harsh truth here is that if the Company did not have reserves to pay the dividends and this contributed to the insolvency or paid them after the process stated they could be illegal. If that proves to be the case they can be reclaimed by the insolvency practitioner.

There are circumstances in which a director can be made personally liable for losses of the business if they know, or ought to have known, that the Company was insolvent and they continued to trade regardless. Further details can be found here.

There are two main transactions that insolvency practitioners are required to review and are potentially reversible if they are deemed to be antecedent transactions of the following kind:

Transactions at an undervalue. If you sold the Company ‘Rolls Royce’ for £5 you shouldn’t be surprised if this transaction is questioned. Worst still, if the sale was to a connected family member, then it is pointing to something that the Insolvency Practitioner will need to investigate.

Preferences. All payments during the final period of trading are reviewed to consider if they are appropriate. This is a check to see if the directors were acting fairly and not showing preference to one creditor over another. For example, paying a family member in preference to another creditor is likely to raise a few questions.

Both of the above examples could lead to claims against the director.

So, while it is true that in most cases Directors are not liable for company debts, there are some circumstances where they may be. We are happy to discuss this with you further and offer a free 20 minute initial call to discuss your problems.

Find out more about our insolvency, liquidation or recovery service.  Learn how we can support you with clear, straightforward and empathetic guidance and support.